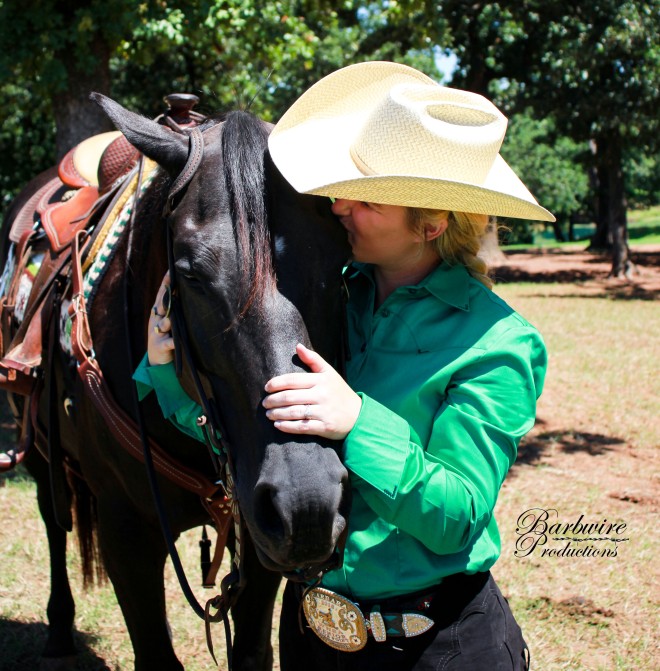 One day when I was around ten-years-old, my mom pointed a woman out to me at a local horse show and said, “She shows at the AQHA World Show and does really well. She always has nice horses.” I was in awe. I knew I wanted to make it like that woman.

Fast forward to high school. I had my taste of success, but I remember watching a group of people complete backing serpentines with their showmanship horses. WAIT, WHAT? Horses do that? I knew then I was not good enough to even begin performing that maneuver. So I walked up to the trainer who was coaching these impressive horse/exhibitor teams and asked, “Can you teach me how to do that?” Less than a year later, a serpentine back was not foreign. In fact, with an All American Quarter Horse Congress Top Five finish in Showmanship, I was pretty good at it. I thought I had made it.

When I was in college, I watched demo riders warm-up the competition horses then learned how to visualize the horse’s movement. I could close my eyes and feel the way that horse moved.  I would apply that knowledge once I climbed in the saddle to catch-ride as I competed for Baylor University’s NCAA team. Since I acquired MVPs and multiple wins during my student-athlete years, I thought I had made it.

I thought I was good enough.

A few years later, with grad school stresses looming over me, horses I thought I knew how to ride were actually a challenge. Maneuvers I thought I knew how to train were complicated. I was a demanding rider with no leniency for errors, both big and small. Heads down, hard stops, fast (mostly, sloppy) spins, asking for too many lead changes in one ride. My rides became unpleasant, stressful, and more damaging than successful.
I decided I would never make it.

Then like a hit to the core that takes your breath away, I suddenly didn’t have horses in my life.  I graduated with a multimedia journalism master’s degree. I announced my plans to move across the country for my dream job to work for an association centered on the horse industry. But I left the horses behind in pursuit of my career dreams. At first, it didn’t bother me as much as my heart knew it would.
I thought I had made it, but just differently.

I missed the horses. I missed their feel, their smell, their movement, their eyes, their mouths, their minds, their spirits. I missed it all. So I went and found horses, any horses, and asked to ride. ANYTHING. I realized in these rare occasions where incredibly friendly, (successful) trainers allowed me to climb in the saddle, the skills I thought I possessed were only in my head. I had talent, yes. Experience, yes. But I clearly did not have the understanding.

After a couple years into my “dream job,” I realized the “dream” is more than an idea. And I wanted more in life than just a job.

I moved home, got married, and started riding. I had two mares to ride regularly. I had a black mare with arena issues and a palomino, who after years of non-competition, did not possess much of a work ethic.

I quickly realized I must be slow with the black mare, who was nervous most of the time. I couldn’t completely cinch her, step on and demand excellence ride after ride or she would tense up physically, and check out mentally.

I also remember the first time I loped a full circle on the palomino. I was proud of her. I was proud of a circle. What? That didn’t sound like the girl from seven years ago, who demanded from her horses day after day and was frustrated if it didn’t work the way she wanted it to immediately. Or even the girl who thought she had made it at sixteen and again at twenty-one.

I was proud of the nervous one’s softness, the times she tipped her nose to the inside with no resistance. I learned that if I sat on her quietly, breathed deeply then let out a big sigh, she’d mimic me and do the same, all the while her whole body relaxing.

I was told when my family bought the palomino mare, “She’s not a good trotter. I’d just bypass that if I were you.” After all, she’s a reiner. Reiners don’t trot.
So, one day, I started asking her what she was capable of in the trot? If she’s rough is there a way to make her better? Every day, we trotted (and still do). One day, I received a compliment on her trot. After saying thank you, I thought to myself, “Really? It’s good? When did that happen?”

And that, my friends, was the key.

At some point, I had become thankful. I had stopped focusing on what I thought was necessary to climb to the top.

None of these successes, which to others, might be defined as mere moments, happen out of a demanding request or merely from applied knowledge or talent. True success occurred because I was beginning to understand. I respected my horses. And success happened because I rode every day and was thankful for my horses.
That’s when I realized, “I made it.”
“Making it” is not what I ever imagined it would be. It’s not a world title, (although I’m always striving to be as successful as I can be in the show pen), it’s not having the straightest rundowns, deepest stops, fastest spins. “Making it” is learning something new about my horses and never stopping. “Making it” is celebrating the small successes, because those small successes turn into significant moments. “Making it” is knowing, I’ll never be a master at my craft because to be a master means I’ve learned everything I need to know. In riding horses, it merely does not exist.

These days, I attempt to ride most days of the week. Sometimes I have big goals when I saddle up, and other times, I choose to enjoy what we’ve already accomplished. It’s a humbling feeling, to finally realize that the dreams I had as a child may never happen for me, and then again, they might. But to know that the continuous journey of “making it” is exactly where I always want to be.